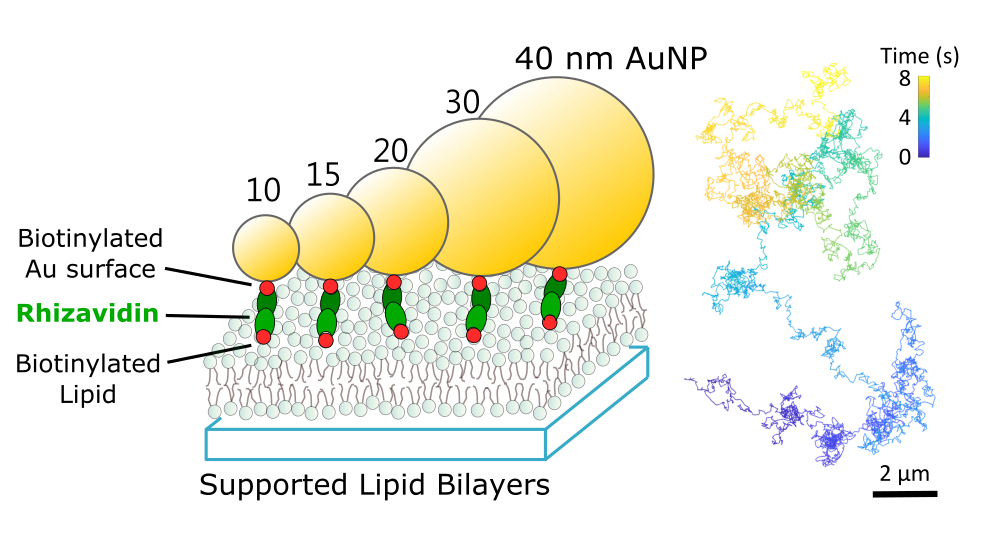 Single-molecule tracking is a powerful method to study molecular dynamics in living systems including biological membranes. High-resolution single-molecule tracking requires a bright and stable signal, which has typically been facilitated by nanoparticles due to their superb optical properties. However, there are concerns about using a nanoparticle to label a single molecule because of its relatively large size and the possibility of crosslinking multiple target molecules, both of which could affect the original molecular dynamics. In this work, using various labeling schemes, we investigate the effects of the use of nanoparticles to measure the diffusion of single membrane molecules. By conjugating a low density of streptavidin (sAv) to gold nanoparticles (AuNPs) of different sizes (10, 15, 20, 30, and 40 nm), we isolate and quantify the effect of the particle size on the diffusion of biotinylated lipids in supported lipid bilayers (SLBs). We find that single sAv tends to crosslink two biotinylated lipids, leading to a much slower diffusion in SLBs. We further demonstrate a simple and robust strategy for the monovalent and oriented labeling of a single lipid molecule with a AuNP by using naturally dimeric rhizavidin (rAv) as a bridge, thus connecting the biotinylated nanoparticle surface and biotinylated target molecule. The rAv-AuNP conjugate demonstrates fast and free diffusion in SLBs (2–3 μm2/s for rAv-AuNP sizes of 10 nm to 40 nm), which is comparable to the diffusion of dye-labeled lipids, indicating that the adverse size and crosslinking effects are successfully avoided. We also note that the diffusion of dye-labeled lipids critically depends on the choice of dye, which could report different diffusion coefficients by about 20 % (2.2 μm2/s of ATTO647N and 2.6 μm2/s of ATTO532). By comparing the diffusion of the uniformly and randomly oriented labeling of a single lipid molecule with a AuNP, we conclude that oriented labeling is favorable for measuring the diffusion of single membrane molecules. Our work shows that the measured diffusion of the membrane molecule is highly sensitive to the molecular design of the crosslinker for labeling. The demonstrated approach of monovalent and oriented AuNP labeling provides the opportunity to study single molecule membrane dynamics at much higher spatiotemporal resolutions, and most importantly, without labeling artifacts.